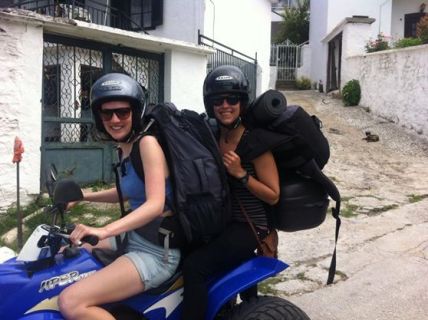 We hired a freakin’ quadbike! And it was the greatest. To be honest, we would have struggled without it. Our accommodation (the wonderfully named Summer Paradies) was about five kilometers more remote than I was expecting.

We arrived late Saturday night. Leonie and I walked the 10 kilometres to Prinos Skala on Sunday. It was hot and we took one of those shortcuts (you know, one of those). A couple of times, striding along the dirt track – kitted out with suncream, sunhats and sunny dispositions (yes, I went there), Leonie jumped, screamed a little and grabbed my arm. I’m the man in our relationship. The biggest and most justifiable jump, scream and grab was due to a long, fibrous snakeskin stretched out by the roadside.

We found Mike’s Bikes on the outskirts of the town. We checked out the prices and settled on a 50’cc. But Mike, much to his chagrin, didn’t have a 50’cc quad bike available for us; we’d have to settle for a 150’cc. Mike put Leonie in charge of driving, and me in charge of luggage. My father would be proud. We took the sturdy blue beast for a lap of the carpark and came back grinning.